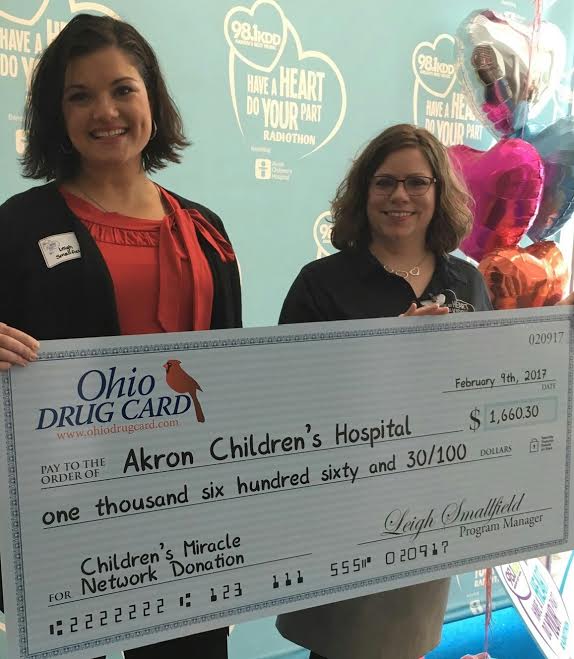 On February 9, 2017 the third floor atrium of Akron Children’s Hospital became a world of magic for three straight days during their annual Radiothon event. Balloon bouquets, columns and arches created a festive environment, completed with a craft table, raffle gifts, and a photo booth for all. Phone banks buzzed with activity. Cow bells shook in the air with celebratory cheers for each pledged donation. Change Bandits arrived, challenged with carrying various cases of change – each weighing them down.

“I grew up a ‘tomboy’ – playing just as hard and reckless as my brothers did,” says Smallfield. “As a result, I made several trips to Akron Children’s for stitches or some other physical ailment. I am now a mother of three. I have relied on and trusted Children’s through RSV, severe childhood asthma, permanent deafness, surgeries, concussions, broken bones, sprains, viruses with overnight stays, as well as behavior and development issues. Children’s has always met or exceeded expectations and continues to provide the best care for my babies. As a token of my gratitude to have such a pillar of support who I trust with health and well-being of my three children, I provide my support in turn. It’s an honor to not only gift the Ohio Drug Card programs prescription savings to families, but also contribute helping Ohio communities get the care they need and the comfort they deserve in unfortunate circumstances.”

United Networks of America, is one of the largest providers of value-added managed care products and services in the country. Funds are raised through the UNA RX Card program. More information about UNA and the Ohio Drug Card can be found here.